The HDPE geomembrane contains antioxidant packages to protect the liner from oxidation during the production of the membrane and during the field life of the membrane. HDPE formulation consists of weight percentages 96-97.5% polyethylene (PE) Resin, 2-3% carbon black and up to 0.5% antioxidants. Carbon black is added to the geomembrane to limit potential damage by UV radiation. The amount of carbon black added is generally less than 3%. Amounts greater than that required to reduce opacity are wasted. The specific antioxidant package used in the HDPE formulation is dependent on the manufacturer of the HDPE. Antioxidants that are most widely used are indicated in Figure 8 Antioxidant Types (Koerner, 1998). Antioxidants are divided into two types; Primary, which limits oxidation during the geomembrane manufacturing process, and Secondary, which provide long-term protection during the service life of the material. 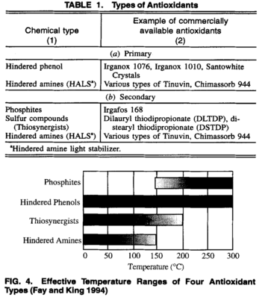 The chemical ageing of a geomembrane follows three stages: 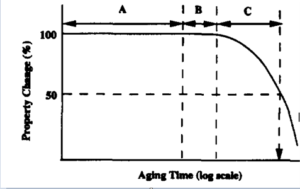 The depletion of antioxidants is the result of the intrusion of oxygen into the structure of the geomembrane.

Testing has been developed to measure the level of remaining antioxidants in a sample of geomembrane and thus provide an indication of the remaining service life of the HDPE. Two tests are:

OIT (Oxidative Induction Time). Samples are heated up under a nitrogen atmosphere, typically to 200C. Oxygen is then introduced to the sample cell, and the length of time before the onset of degradation, as seen by the initiation of an exothermic process in the DSC trace is measured

HPOIT (High Pressure Oxidative Induction Time). Similar to OIT testing but is carried out at lower temperature, 150C and higher pressure. The procedure was developed because heating to 200C can cause the decay of some types of antioxidants (HALS or Hindered Amine Light Stabilisers)and provide a false (low) indication of the level of antioxidant remaining in the formulation. 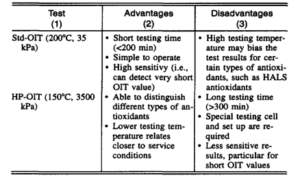 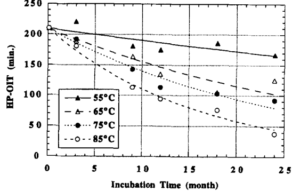